Part of the Aqida Series 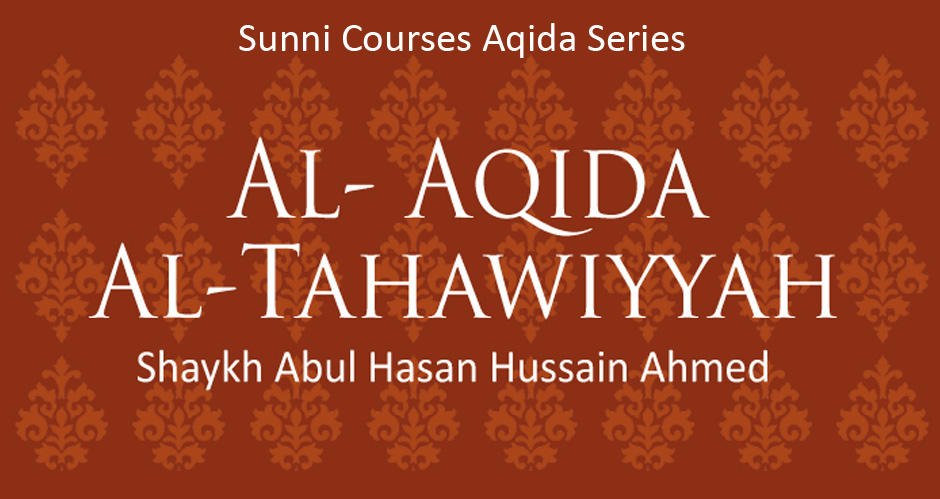 "I would encourage these aqida courses by Shaykh Abul Hasan Hussain Ahmad. His research and insight is extensive in this field. May Allah spread his benefit."

"Dr Abul Hasan is amongst the few scholars in the UK that I would highly recommend to study the sensitive subject of Aqidah from. A true well researched scholar blessed with humility and deep scholarly insight."

"Shaykh Dr. Abul Hasan Hussain Ahmed (hafidhahullah) is a truly amazing scholar who has great insight - especially in areas related to 'aqida and hadith. I have personally benefitted from Shaykh's profound knowledge and in-depth research. I sincerely advise everyone to attend this course and benefit from this true gem of a scholar, who has dedicated his life to the sacred sciences.

'Aqida (Islamic beliefs) is a very important area which every Muslim must study in order to know what he/she must believe, along with those beliefs which should not be held by any Muslim, and I can think of nobody better to study this subject with than a specialist in this field such as the noble Shaykh."

Make sure you attend!

He is noted as being a leading authority in Aqeedah for the UK. His manner of delivering caters for the beginner and more advance student alike delivering in a simple, easy to follow way.

I myself have sat in the class from start to finish and would strongly recommend those with an interest in the subject to definitely take advantage of the Sheikh.

May Allah preserve him, accept these efforts from him and give him more ability to benefit the ummah even further, Ameen."

"Al hamdu lillaah, I have the CD set of this course already, but I am signing up to take the online version of the course. Dr. Abul Hasan displays great mastery of this book in the way he presents it, which shows the influence of the great teachers that he's had, as well as the scientific approach he uses in presenting this valuable information in a very systematic way. This course is a must for anyone who is serious about the most important science in Islam, which is discussed in one of the most important books on that science, Imam Tahawi's 'Bayan as Sunnah wal Jama'ah'."

"The comprehensive yet concise Creed of Al Imam Abu Ja'far At-Tahawi, rahimahUllah, presents in great detail and with profound expressions the beliefs of the Salaf and Khalaf of Ahlus Sunnah wal Jamaa'ah. Shaikh Dr. Abul Hasan Hussain Ahmed is one of the rare gems of contemporary Muslim scholars who have the extensive educational background, teaching experience, and mastery of the English language to present and simplify its invaluable points for the English speaking audience. This course should definitely be attended by all who seek a deeper understanding of the Islamic creed from a qualified scholar in the field."

"Al-Hamdulillah I've had the oppurtunity to study Aqeedah al-Tahawiyyah with our beloved Shaykh twice. Shaykh Abul Hasan is extremely thorough in his delivery of intricate matters of Aqeedah and Hadith and provides clarity on many controversial topics which are misunderstood by many.

The Shaykh is a true Muhaqqiq and being under his tutelage is an inspiring and humbling experience.

I pray that Allah preserves him and continues to utilise him to preserve the deen."

Registrations are now closed for this course. Please sign-up to our mailing list at the bottom of this page to be kept informed about 2 more courses coming up in the 'Aqida Series.

Approximately 4 hours of learning per session

A course handbook will be provided

Light refreshments will be available through the duration of the course

** For all the brothers and sisters who live far away and cannot attend in person, we have made online provision so you can take benefit from this course interactively. Live audio will be streamed via a online virtual classroom. Learners can ask questions to Shaykh directly via a built-in chat function and also have the same privilage in requesting Ijaza for the course with condition of full attendance and strict punctuality.

Tahawi's "Doctrine" (al-`Aqida), though small in size, is a basic text for all times, listing what a Muslim must know and believe and inwardly comprehend. There is consensus among the Companions, the Successors and all the leading Islamic authorities such as the four Imams and their authoritative followers on the doctrines enumerated in this work, which are entirely derived from the undisputed primary sources of Religion, the Holy Qur'an and the confirmed Hadith. Being a text on Islamic doctrine, this work sums up the arguments set forth in those two sources to define sound belief, and likewise, the arguments advanced in refuting the views of sects that have deviated from the Sunna.

Shaykh Dr. Abul Hasan Hussain Ahmed is a resident of the UK who initially studied the Islamic Sciences for more than 5 years under the late Muhaddith and Hanafi Faqih, Shaykh Abdal Haleem (d. 2004).

He studied Arabic with the Egyptian linguist, Dr Muhammad Fathy.

He has also received various forms of classical warrants of authorisation known as Ijaza from more than 100 learned scholars of various Muslim lands:

From the Hijaz (Makka and Madina)

From India: Shaykh Nasir Ahmed (b. 1335 AH), Sayyid Salman al-Hussaini and the late Shaykh Ahmed Ali al-Surati who lived in Leicester and died in 2011 aged around 95.

The shortest chain he possesses back to al-Hafiz ibn Hajar al-Asqalani (d. 852 AH) is from a stupendously short 6 links (via Ijaza li ahl al-Asr) only, from the late Hanafi Shaykh, Kamil ibn Yasin al-Kalabadhi.

On the secular front he has qualified with a First Class Honours degree in Applied Chemistry attaining first position in his class with a subsequent Doctorate in the same field. He has also worked as a Researcher in the Chemical industry. In his spare time he compiles various Islamic articles for mainly internet distribution. Of the largest two works he has written are one in defence of 20 rak’ats of Taraweeh exceeding 300 pages and his latest piece is regarding the authenticity of a narration from Malik al-Dar describing a certain event that occurred during a drought in the time of the second caliph, Umar ibn al Khattab (ra) in more than 200 pages.

Currently, he is working on writing a bulky work on the matter of where the hands should be placed in Salah with an analysis of practically all known narrations on this specific matter. This work will by Allah’s decree also show some rare narrations that have not been quoted by most of the Muhaddithin of the past and have been discovered by means of painstakingly collecting rare Arabic manuscripts from some Muslim lands. In this regard, he is also a collector of Arabic manuscripts and to date holds more than 5000 from all over the world.

Many of his articles and books are due to be published for free distribution on a new website known as darultahqiq.com

» I am a brother - Registration closed, please enrol onto the Distance Learning format of the course

» I am a sister - Registration closed, please enrol onto the Distance Learning format of the course

** For all the brothers and sisters who live far away and cannot attend in person, we have made online provision so you can take benefit from this course interactively. Live audio will be streamed via a online virtual classroom. Learners can ask questions to Shaykh directly via a built-in chat function and also have the same privilage in requesting Ijaza for the course with condition of full attendance and strict punctuality.